Simon who received the Dickin Award 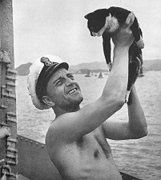 Simon is the only cat to receive the Dickin Award for Bravery At Sea.

And Remembrance Sunday ( Nov 10) near Veterans Day is a time to think about those who have performed heroic acts on our behalf.

This includes Simon who is a hero to Larry The Cat .aka. @Number10Cat at #10 Downing Street.  Larry will be honoring Simon by doing what Larry does best - Keep On Keeping On !

Simon finally succumbed to his wounds and infection and passed away on Nov 28 1949 after protecting his ship from varmints within Theater of Action in China.  Surviving a shell blast in his bunk, deafened and almost blinded, he nevertheless continued with his duties to rid the ship of rats.

His is an inspiration tale.

April 20, 1949 - HMS Amethyst on peace-keeping duty relieves the HMS Consort, and is attacked and 20 are killed.

Simon The Cat, severely injured himself, keeps morale up while in sick bay with the other injured soldiers.

July 30, 10 pm - The ship makes a 104 mile run toward open water after being held hostage for 101 days, as their dwindling supplies run out.

August 5 - PDSA unanimously agrees that Simon is to receive the Dickin Medal.

November 11 - Simon and the crew of the Amethyst arrive back in England as heroes.

December 11 - the date set for Simon to formally receive his medal, but Simon passes away on November 28, 1949

For the complete story http://www.purr-n-fur.org.uk/famous/simon.html of which the following is but a portion of the tale:

" Simon caught at least one rat a day, often more, but he found another role in the sick bay, where caring for his own wounds he helped the younger boys get over their own traumas.

There was one particularly large, bold and vicious rat that was causing havoc with the supplies; the crew had named him 'Mao Tse-tung'. Many attempts were made to trap him, as it was felt that Simon, in his weakened state, would not be able to cope with him. The rat had even evaded the traps.

However, one day the animals came face to face: Simon sprang first and killed the rat outright. The delighted crew hailed him as a hero, and he was promoted to Able Seacat Simon — the feline equivalent of Able Seaman.

The days dragged on, more than two months after the original incident, with fierce heat and humidity and no relief in sight, with dwindling supplies of everything, including fuel. At times the boilers had to be shut down to conserve fuel, so there was no ventilation and no refrigeration. Even Simon started to wilt, although he continued with his duties and his rounds, along with the ship's terrier dog Peggy, to keep up the crew's flagging spirits. Then there was a typhoon; Simon was kept shut up to avoid possibly losing him, and slept through it all in the captain's cabin. Amethyst survived again — but rations and fuel were becoming desperately scarce. Captn Kerans decided he had to make a dash for it while it was still possible."